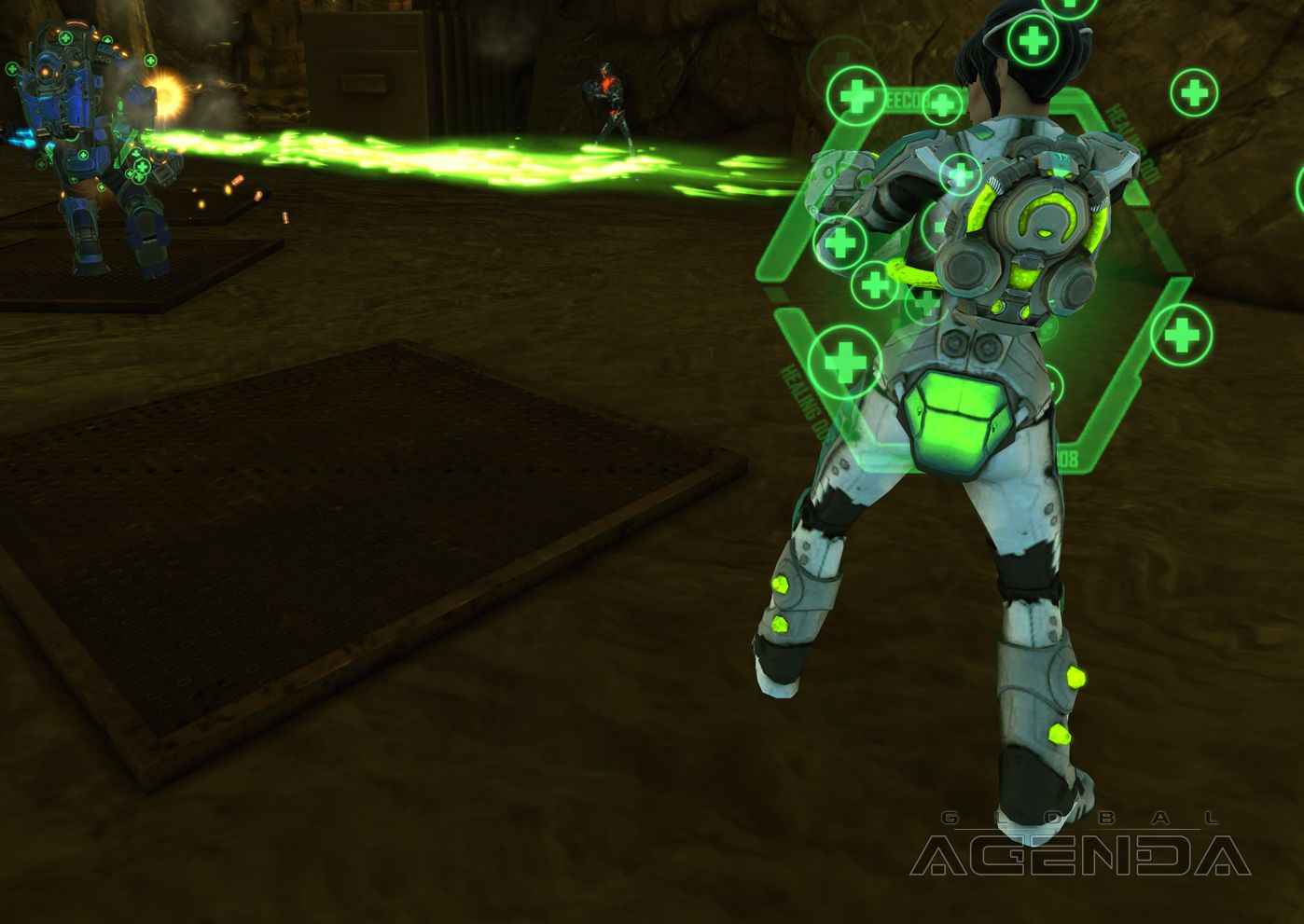 The Hippocratic Oath has no place on the battlefield!

So you"re interested in being the Medic? Normally, you"d be the backbone of any assault, the life-giver of your team as they wage war. Global Agenda mixes that formula up though, giving Medics the ability to kick ass as well as heal. Rejoice, my healing friends. No longer are we running around like chickens with our heads cut off when engaged; we can toss aside our healing toys and dispense pain! Of course, afterward we dish out the pain we’re regulated back to keeping everyone whole and healthy.
The Melee Weapon

Your trusty scalpel is the Poison Injector. This is used to backstab turrets, fend off recons via parrying, and generally ruin people"s day in close combat. If you"re using the Pain Gun, this will get a lot more use as a primary killing tool, but leave the killing to others and just block attacks. If you hit someone from behind, you"ll leave a solid poison damage-over-time effect on them, so it"s always worth trying to circle your opponent.
The Guns

The Euthanizer is your standard rifle, and fares exactly the same as the rifles for other classes—nothing stands out as great, but nothing is particularly bad about it, either. However, it"s outclassed by the other two weapons: the Agony Gun and Pain Gun.

The Agony Gun does high damage in single, spaced out shots. It also slows the target and debuffs their defense slightly, and leaves a poison effect on them for a short duration for additional damage based on how hard the initial shot hit them. The downside is a very limited range, anything beyond 75 feet will suffer far less damage from the initial hit and the poison debuff.

The Pain Gun basically makes someone a sitting duck. It drastically lowers their speed and increases all damage received by 30%. If you get hit by this, chances are you’re dead and there"s nothing you can do about it. The downside is that you need someone to finish them off for you, or you"re going to go in with your Rambo-size knife and try to take care of business yourself. It"s not a shrink ray, it"s a healing beam!

Medics have two types of direct healing delivery: a beam that locks on the target at close range, and a Nanite needle gun that places a heal-over-time effect on them. For your beam-type healing, you"ll likely be chasing an ally around keeping it locked on him and healing directly the moment they"re taking damage. The Biofeedback Beam gives you about 25% of the healing your target is receiving so you can stay on them and in the game when you receive a stray bullet burst or rocket, and the Boost Beam gives the target a damage buff as long as you stay on them. You"ll find these weapons behave a lot like the beams of Team Fortress 2, if you happen to be familiar with them.

The Nanite series of healing weapons is much easier to use but much less effective versus burst damage unless you use other healing devices to keep your dying ally in the game.

Basically a shot in the neck from anywhere up to mid-range will heal them for a solid amount every second for 10 seconds and provide a buff. The Enhancement System will boost the damage of anyone under the effect of your healing buff, and the Delivery System will increase the power regeneration of anyone with the buff. Both of these are highly valued in the heat of battle when the heal is likely needed and received, so the choice of which you bring to the battlefield can prove a tough one.
The Jetpack

It"s kind of small and silly. However, with how little Medics contribute when not in the fray, you"ll be using this a lot. Get used to it!
The Off-hands

These are where your burst healing and damage will come from. Your first line of defense against your allies" death is the Wave line of powers. These emit a wide area instant heal that can also provide a substantial buff to those affected, but the effect does not hit you. The variety includes straight healing, bonus damage, bonus power regeneration, and bonus armor. Fortunately since these don"t affect you and as a medic you need to stay alive, there is the Regeneration ability. This basically puts a strong heal over time on you and debuffs your damage ability for the same duration. You don"t care about the damage debuff typically since it doesn"t affect your healing, but it can make you feel like a god in 1v1 situations.

Medics also have a set of grenades and short-term auras. You can use the Healing Grenade as a long distance Hail Mary of a heal, or you can spike it to heal yourself and also provide a heal over time that can cleanse debuffs. The Poison and PowerVirus grenades are debilitating bombs that also leave potent DoTs on your opponents hit by them, lowering defenses and limiting power regeneration. When it comes down to an instant fight changer, the Neutralize Wave will debuff everyone in a wide radius and dispel all buffs they may be under and the Poison Aura will cause crippling damage to everyone near you for a short time. There"s a whole lot more to Medics than just healing, that"s for sure!
The Boost

The Medic Boost is a powerful heal over 10 seconds to everyone hit by it. It can more or less confer invulnerability to everyone it hits unless they are under potent burst damage or sniper fire. It also affects the Medic, so use it the moment you get into a situation you think you might not live through.
Is it fun?

One of the annoying things about being a Medic is that you never really get to see the tangible benefits of your many abilities. All you see in the end is your team standing, and their team respawning. If that"s what happened, then you did your job; give yourself a pat on the back. If that sort of scenario puts a smile on your face then the medic is right up your alley. Of course, you can also cause a fair bit of havoc yourself. So whether you"re in the mood to support or slay, the medic will let you have your way!